Longueuil, April 7, 2016 - The appointment of the new Executive Director of the Réseau de transport de Longueuil (RTL) was announced during the public meeting of the Board of Directors on April 7.

“I am very pleased to welcome Michel Veilleux as the RTL’s new Executive Director. After a selection process that began in February and involved an outside recruitment firm and a consultant specialized in public transit, and after having met with several highly qualified candidates, the selection committee recommended an experienced manager with a remarkable career in public transit.

“With a Bachelor’s degree in Urban Planning and a Master’s degree in Territory Planning and Regional Development, Mr. Veilleux has held the position of Assistant Executive Director, Sustainable Development with Ville de Longueuil since the fall of 2014. He has 14 years’ experience in various positions at the Société de transport de Montréal (STM), in addition to seven years with the Agence métropolitaine de transport (AMT), where he served as Director, Planning and Development, and then Vice-President, Planning and Innovation, a position he held from 2009 to 2014. Essentially, Mr. Veilleux has been working in the field of public transit for close to 25 years!

“Mr. Veilleux was also Chair of the Organizing Committee for the 48th annual conference of the Association québécoise des transports (AQTr) in 2013. In 2009, he was one of 24 North American public transit leaders to participate in the American Public Transportation Association’s Leadership Class.
“The new Executive Director will start on April 25. We wish him all the best in his new position. We are confident he will head up major projects for the RTL while representing the interests of our clientele in various forums, in particular regarding Bill 76, which proposes to modify how public transit is planned and run in the metropolitan region.
“Welcome to the Réseau de transport de Longueuil, Mr. Veilleux!”
This was the speech given on April 7, 2016, by Colette Éthier, Chairman of the RTL’s Board of Directors, to announce the appointment of Michel Veilleux. 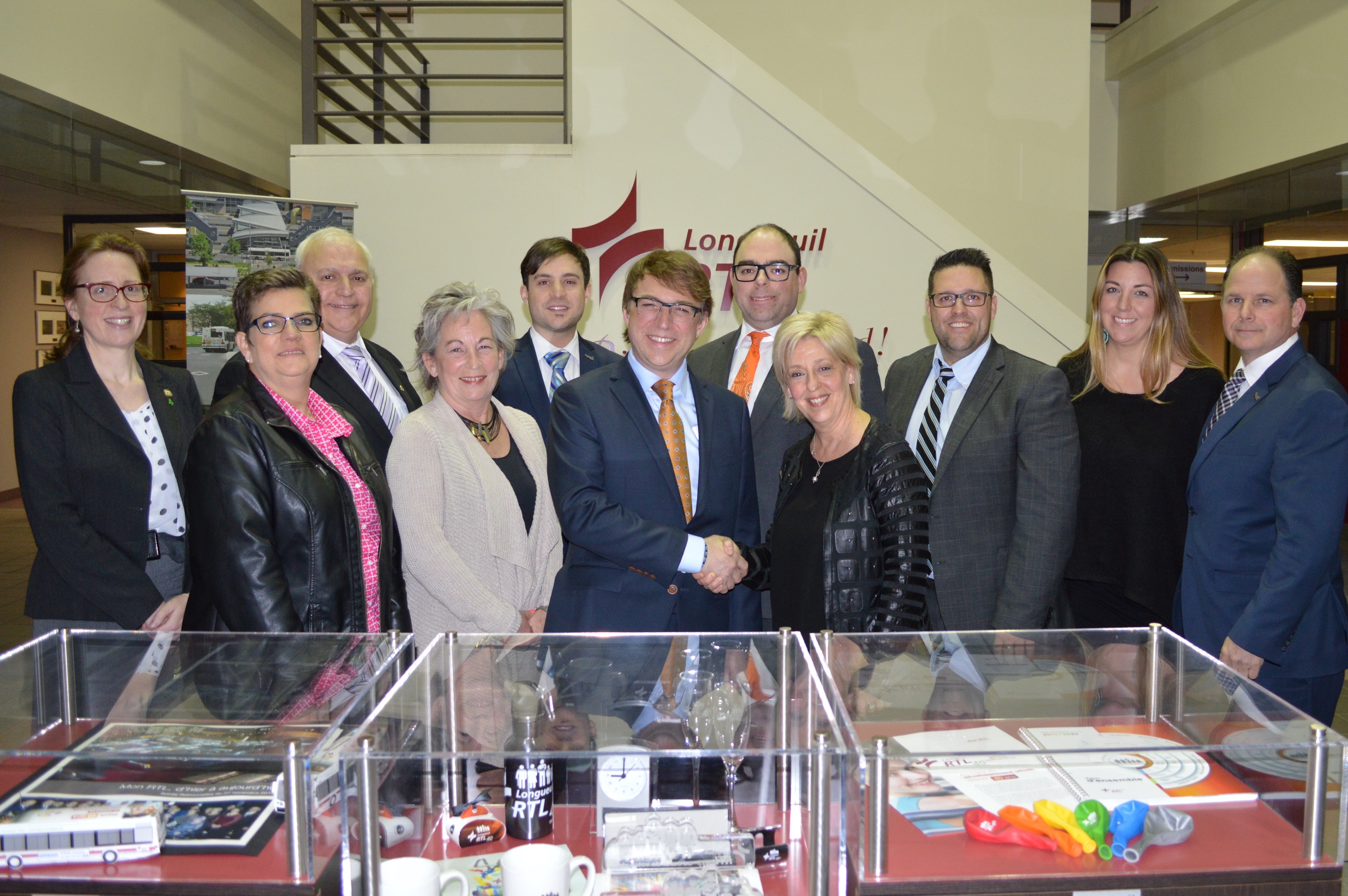 Michel Veilleux, the new Executive Director of the RTL, will start on April 25. He is surrounded by the members of the RTL’s Board of Directors.
About the RTL
The Réseau de transport de Longueuil is the main transit provider for individuals within the five cities that comprise the Agglomération de Longueuil. The third-largest public transit organization in Québec, the RTL operates a network of 793 kilometers. With some 1,100 employees, the RTL is a major employer that contributes to the economic vitality of the region.
Ever receptive to its users, RTL plays a key role in the lives of the people and the communities it serves by providing solutions that are efficient, innovative, and adapted to the evolving needs of its clientele. Improving quality of life for the citizens of the Agglomération de Longueuil is a top priority for RTL.
Source:
Anne-Louise Milot
Communication and Public Affairs Advisor
Réseau de transport de Longueuil
450-442-8600, ext. 8145  |  almilot@rtl-longueuil.qc.ca