Longueuil, June 20, 2018 – On June 17, employees of the Réseau de transport de Longueuil (RTL) travelled to the Opération Enfant Soleil telethon in Québec City to present a cheque for $26,600 on behalf of their colleagues.

Each day, the RTL’s employees help raise money for Opération Enfant Soleil by buying their coffee from certain specially marked vending machines. All profits automatically go toward the cause. Another way employees raise money is through ticket sales, something they have been doing for the past six years. This year, proceeds from a poker tournament and the annual transit corporation hockey tournament in Boucherville made up a large part of the donation.

“Commitment is one of the RTL’s core values, so we’re thrilled by our employees’ dedication to this cause. Through its many partnerships, the RTL continues to demonstrate its commitment to the community. We wish to congratulate and thank our employees for their tremendous generosity,” stated Michel Veilleux, Executive Director of the RTL.

Since 2013, the RTL’s employees have donated more than $160,000 to Opération Enfant Soleil, including this year’s donation. 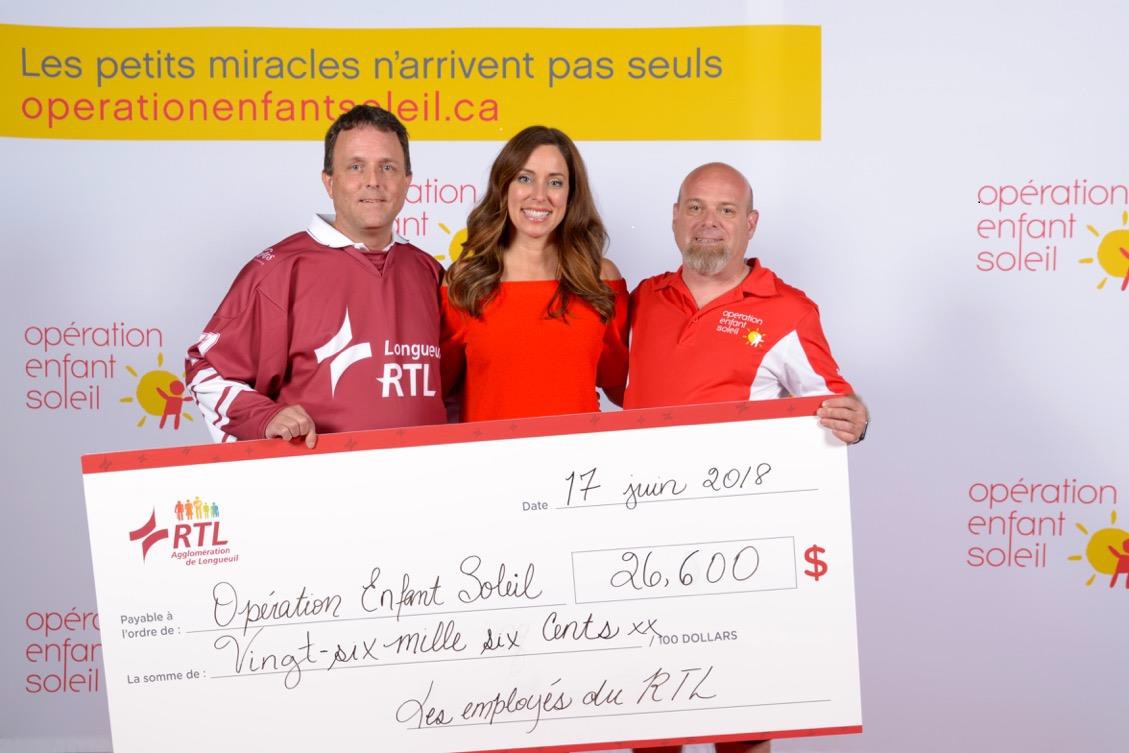 Photo caption: Thanks to Éric Gauthier and Pierre Héroux for their dedication. They are accompanied by telethon host Annick Dumontier. Thanks also to Martyne Brisson and Marc Boivin (missing).

About the RTL
The Réseau de transport de Longueuil (RTL) is the main transit provider for individuals within the five cities that comprise the Agglomération de Longueuil.
The third-largest public transit organization in Québec, the RTL operates a network of 793 kilometres. With some 1,100 employees, the RTL is a major employer that contributes to the economic vitality of the region.
Ever receptive to its users, the RTL plays a key role in the lives of the people and the communities it serves by providing solutions that are efficient, innovative, and adapted to the evolving needs of its clientele. Improving quality of life for the citizens of the Agglomération de Longueuil is a top priority for the RTL.